Let your batteries tell you when they are over temperature. 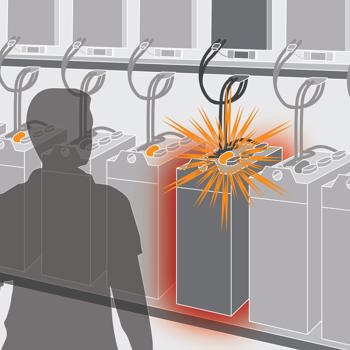 Using a lead acid battery when it is over temperature, damages the battery and reduces its lifespan.

For every 10 degrees over 40°C the battery cycle life halves. So if you have a battery with an average lifetime temperature of 50°C it will only deliver 750 cycles, not the 1,500 cycles it's supposed to.

Heat is generated during the charging phase of the battery cycle so, at the end of the charge, the battery is at its hottest. The amount of heat generated during charge depends on the charger and the type of battery so a fast charge system will generate significantly more heat in the battery than an air mix system. When the charge ends the battery should, in theory, be allowed to cool to below 40°C. How long it takes to cool depends on the temperature around the battery, so batteries cool quicker when sitting on a stand than in a forklift compartment. Traditionally it is recommended that batteries should be allowed to cool after charge for 8 hours working on the simple, 8-hour shift, 8-hour charge, 8 hours cool, working day. This takes no account of the temperature at the end of the charge or the temperature of the battery that surrounds it. In hot countries where the ambient temperature is very high, batteries can be constantly operating in a condition that is dramatically reducing their life. A battery charged by a fast charger on the forklift in a battery room without air conditioning in Malaysia will take far longer to go below 40°C then a battery charged by an HF charger in battery racks in an air-conditioned DC, if ever.

With potential huge ROI, the SmartBlinky Temperature Monitor will help to maximise the number of cycles you get out of your lead acid battery, and stop you having to replace them early.

What do the LED indications mean?
Pulsing Orange – OK

Is this reverse polarity protected?
Yes, this makes for a much easier install.

At what temperature does my battery start to be negatively affected?
We suggest keeping the battery below 40°C, for every 10°C over this the battery life cycle halves, the Smart Blinky Temperature monitor will alert you of these high temperatures.

Perfect for batteries that don't leave the truck. The LED housing can be edge-mounted for high visibility of the super bright indications.