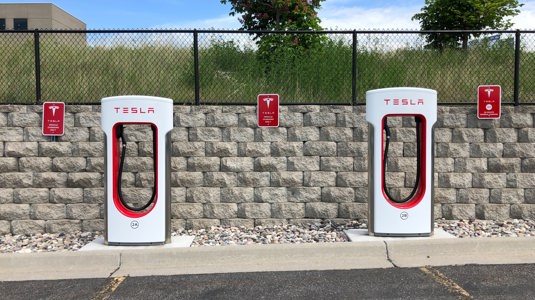 According to the Julian Rendell reporting for autocar.co.uk, "The lead cells would be charged with cheaper off-peak electricity, to reduce the cost to a fuel station and EV owner of charging during the day. In particular, the lead batteries could help avoid the fuel station incurring “peak demand charges,” an extra fee charged to US businesses by electricity companies."

A previous report compiled in 2018 by management consultants McKinsey “How Battery Storage Can Help Charge The Electric-Vehicle Market” suggests that a fuel station could save $2400 per month in electricity costs alone by reducing the demand charge.

“A system configured this way could reduce demand charges to a minimum; that would be $3000 a month that wouldn’t need to be passed on to consumers, which would substantially cut costs. Tesla has already said it is going in this direction, and others may follow suit,” said McKinsey.

Electric vehicles, such as the cars manufactured by Tesla, forklift trucks, and everything in between that use Li-Ion batteries for energy storage, will always face the problem of charging during peak times. In an industrial environment, a considerable change in the charging process means that there's no real way to easily avoid the cost of charging at peak times, as Li-Ion forklift trucks are intended to be opportunity charged. Shift change-over, the truck goes on charge, lunch-time? On charge, even break times are utilized to ensure charge windows aren't missed.

Always hitting that charge point is integral to the smooth running of any operation, as if one is missed, the knock of effect could leave a Li-Ion truck stranded in the middle of an aisle, or a car stuck in the middle of the road.

As the importance of efficient energy generation and storage increases, so does the need to reduce the cost of storing the energy. In any application, lowering the total cost of ownership is the ultimate goal, and the more we can do to reduce the total cost of ownership, the better. By having stored energy readily accessible when it's needed most and not having to rely on drawing a load during peak times not only helps reduce costs from energy consumption, it helps to streamline the cost of your operation down the line too.

The fact that Tesla is even considering using lead batteries to store power and avoid charging at peak times is a testament to the importance of energy consumption. It all goes to show how lead batteries are still one of the most viable and cost-effective ways to store energy a whole range of applications.